There is Power in HIS Name – Spiritual Warfare

The Bible is the most sold and oldest book in the world. I am not here to discuss religion per se. Religion is man-made. I am non-denominational. I am a follower of Christ. I am NOT perfect. I am a sinner. I sin daily, I need Jesus. I need forgiveness. I was born a sinner. I will be a sinner until the day I die.

I struggle daily, with frustration, doubt, anxiety, depression, insecurity, patience, and many other things that are considered un-Christian like. I also know that Jesus is a call away, not just for forgiveness, not just when I need something, also in times that I just need to say thank you for these struggles.

Some folks believe that the Bible is based on stories made up of non-factual information. If this is true, why are there so many unexplained miracles? Why are there so many things that happen every day to people unexpectedly outside of the normal? Are these coincidences that just so happen to align within perfect timing?

Let me tell you about “Power in the Name of Jesus”, yes, it sounds a little “crazy”.

Undoubtedly, the closer you are to God, Jesus, and filled with the Holy Spirit, the more likely it is you are going to deal with “spiritual warfare“.

Spiritual warfare is the Christian concept of fighting against the work of preternatural evil forces. It is based on the biblical belief in evil spirits, or demons, that are said to intervene in human affairs in various ways. Although spiritual warfare is a prominent feature of neo-charismatic churches, various Christian groups have adopted practices to repel such forces, as based on their doctrine of Christian demonology, too. Prayer is a common form of spiritual warfare among Christians. Other practices may include exorcism, the laying on of hands, fasting, and anointing with oil.

The spirit world, according to Spiritualism, is the world or realm inhabited by spirits, both good or evil of various spiritual manifestations. Whereas religion regards an inner life, the spirit world is regarded as an external environment for spirits.

As far back as I can recall, I have experienced a heightened sense of intuition or “knowing” of things to come. Over the years, episodes of spirits or dark entities have haunted me, truly, almost to the point of antagonizing me. Demonic, spirits, whatever you wish to call them, I have seen them since I was a child. Hiding in corners, scurrying across the floors, lurking in shadows, running through the woods. They scared me. I dabbled with seances, my mother played with Ouija boards. Maybe through these openings to the “spirit world”, a welcoming of such, has caused “spiritual warfare“.

As a child, I often thought something was wrong with me, not just based on how my mother treated me, or the way I lived, but through these “feelings”.

I have always known I was different, in many ways. Into my teenage years, there were several times I was awakened by being held down on the bed by absolutely nothing but a “presence”, lingering above me. It was invisible, yet it was there, strong, evil. The only way to move or to make it go away was through prayer and within that prayer was saying “In the Name of Jesus”. In a few situations where the “presence” held me down on the bed, as I turned my head to look around, the dresser drawers opened and closed over and over. Again and again, I would have to pray and rebuke the “presence”, in the Name of Jesus.

Always experiencing nightmares, odd vivid, and lucid dreams. Strong intuitions, still having visions through dreams of knowing things of others or things that are going to change/ happen.

I’m drawn to crystals, rocks, and gemstones. I can feel their energy. Scientifically proven, they all have energies, this is factual.

I love the smell of sages and Holy wood (Paleo Santos) and even essential oils. Homapathetic remedies I believe are helpful, Reiki energy I believe is real, meditation works for some (not me personally), I do not believe you have to be of a certain religion to enjoy yoga. I believe all of these things serve a purpose in life.

With this being said, are you judging me yet? Are you wondering how a Christian could be drawn to the energy of crystals, rocks, gemstones, the smells and natural healings of Palo Santos, essential oils, Reiki, and how Jesus fits into all of this?

I have often wondered that as well. I struggle with it. I have tried to shut it off. I have battled being called a Pagan, a witch, a Wiccan. The truth is, I am simply a Christian, in tune with spirituality, and I believe in Jesus, the power of prayer, and power in the Name of Jesus. I am filled with the Holy Spirit, I am tested because of my faith. It is truly spiritual warfare!

Now concerning spiritual gifts, brothers, I do not want you to be uninformed.  You know that when you were pagans you were led astray to mute idols, however, you were led.  Therefore I want you to understand that no one speaking in the Spirit of God ever says “Jesus is accursed!” and no one can say “Jesus is Lord” except in the Holy Spirit.

For though we walk in the flesh, we do not war according to the flesh, for the weapons of our warfare are not of the flesh, but divinely powerful for the destruction of fortresses.

I fight these battles, but I fight them in my mind, then I fight them on my knees, I try to understand, I call unto Him, through prayer, in the Name of Jesus!

This is how I fight my battles

“Be self-controlled and alert. Your enemy the devil prowls around like a roaring lion looking for someone to devour. Resist him, standing firm in the faith.” 1 Pet. 5:8-9

“No weapon that is formed against you will prosper, and every tongue that accuses you in judgment you will condemn. This is the heritage of the servants of the Lord, and their vindication is from Me,” declares the Lord.” Is. 54:17

“Put on the full armor of God, so that you can take your stand against the devil’s schemes. For our struggle is not against flesh and blood, but against the rulers, against the authorities, against the powers of this dark world and against the spiritual forces of evil in the heavenly realms. Therefore put on the full armor of God, so that when the day of evil comes, you may be able to stand your ground, and after you have done everything, to stand.  Stand firm then, with the belt of truth buckled around your waist, with the breastplate of righteousness in place, and with your feet fitted with the readiness that comes from the gospel of peace. In addition to all this, take up the shield of faith, with which you can extinguish all the flaming arrows of the evil one. Take the helmet of salvation and the sword of the Spirit, which is the word of God.” Eph. 6:11-17

I do not claim to understand it all, I am learning still, day by day, more about the Word of God and the path I am taking.

I do know that in the end, Jesus has the Victory, WE have the Victory! 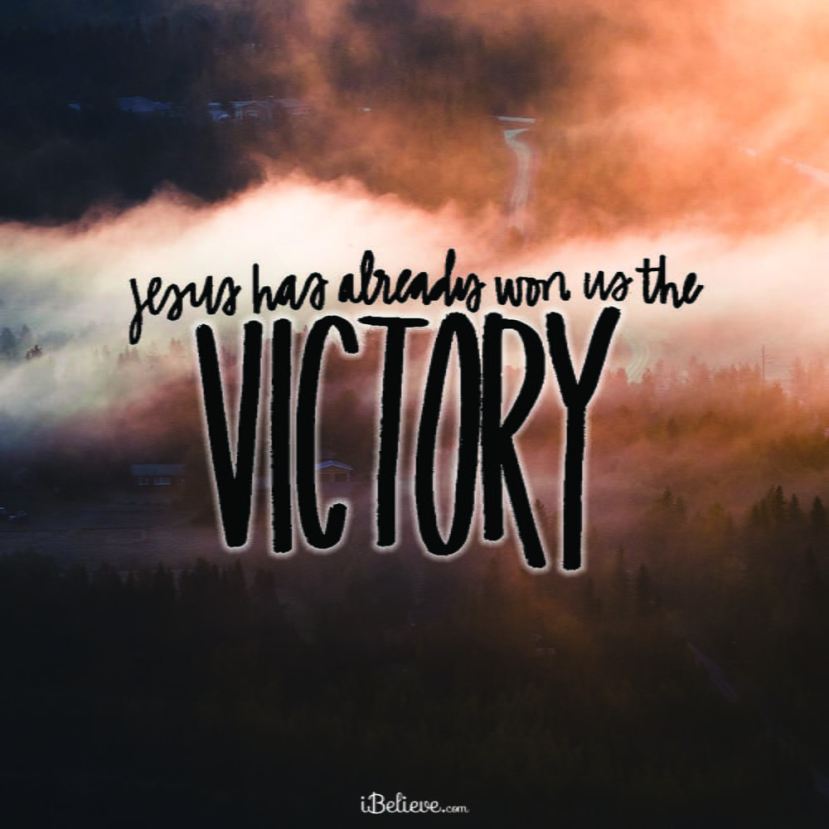